Hooray - the butterfly thinlits are back in stock if they are on anyones wish list.

It's sometimes difficult to remember all the lovely stuff we have during this period when we are about to get a peek at the new catalogue!!!

This is a scrapbook page designed by Jenny that we made on our retreat back in March and which uses the Butterfly Basics set and matching thinlits that we haven't been able to buy for quite a few weeks now. 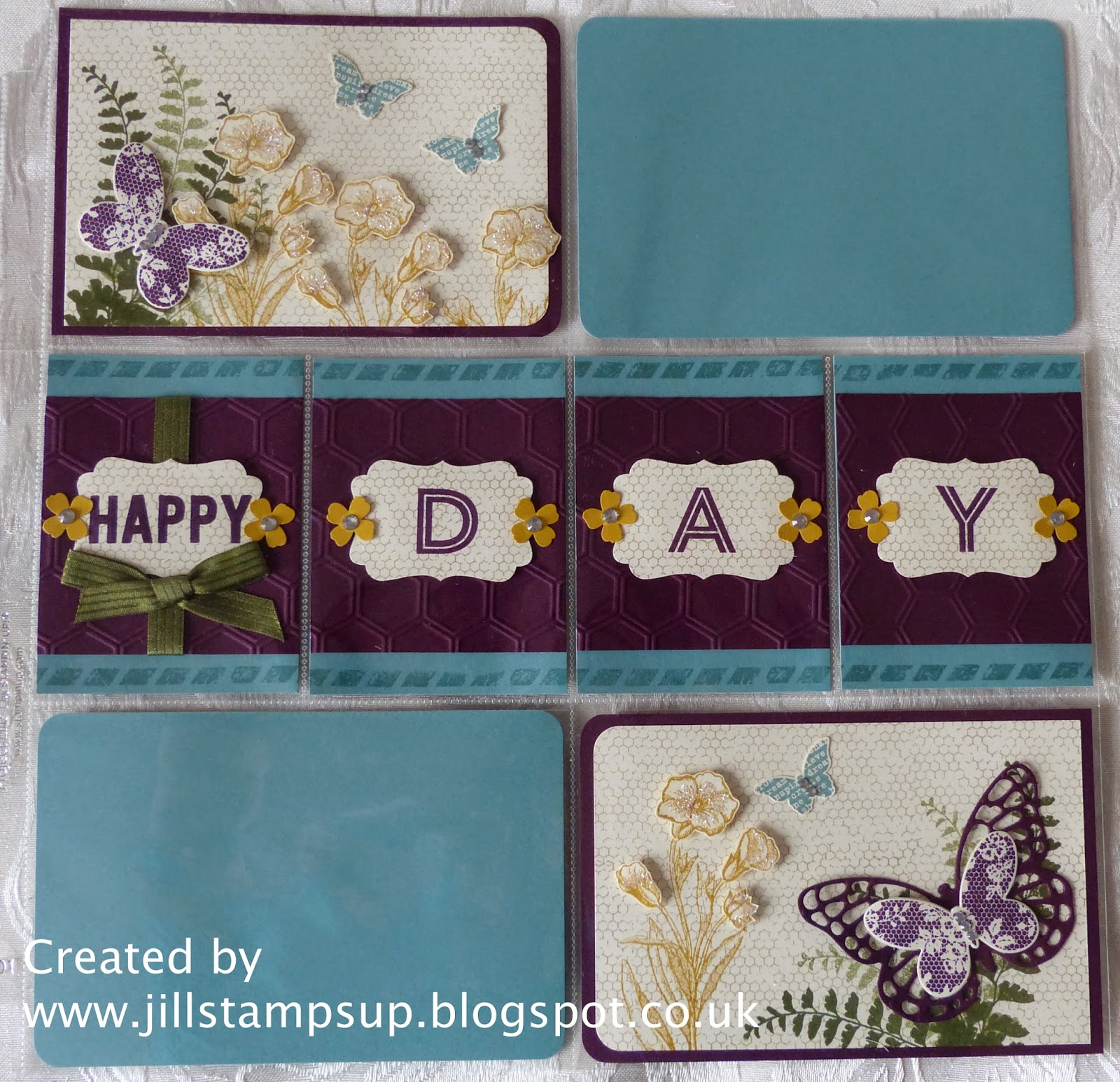 It's such a gorgeous page isn't it?

All the stamps are in the Butterfly Basics set and we used the colours Lost Lagoon, Blackberry Bliss, Hello Honey and Old Olive for the main details.

I did this page very late at night/early in the morning so I could finish it!!

The 'DAY' letters come from the Metro Type Alphabet set and the 'HAPPY' came from the set So You I think.

There was a bit of fussy cutting of the flowers, particularly on the top image but it was worth it.

You Can Create It!

Well, retiring products are flying out of the door - I get a peek at the new catalogue next week, very exciting.

In the meantime though we still have plenty of goodies to purchase and play with.

I've decided to join in with 'You Can Create It!' which is being run in the UK by SU demos Teri and Monica (clicking on their names will take you to the first challenge).

You pay £2.50 for a month or £12 for 6 months to receive a little kit each month to make a card with. You have to use at least a part of each item in the kit but can add additional items too.

This was the kit for the second month: 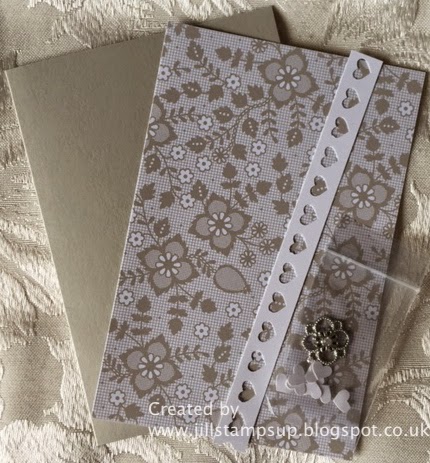 I was faffing as couldn't decide what to make so just went for it! 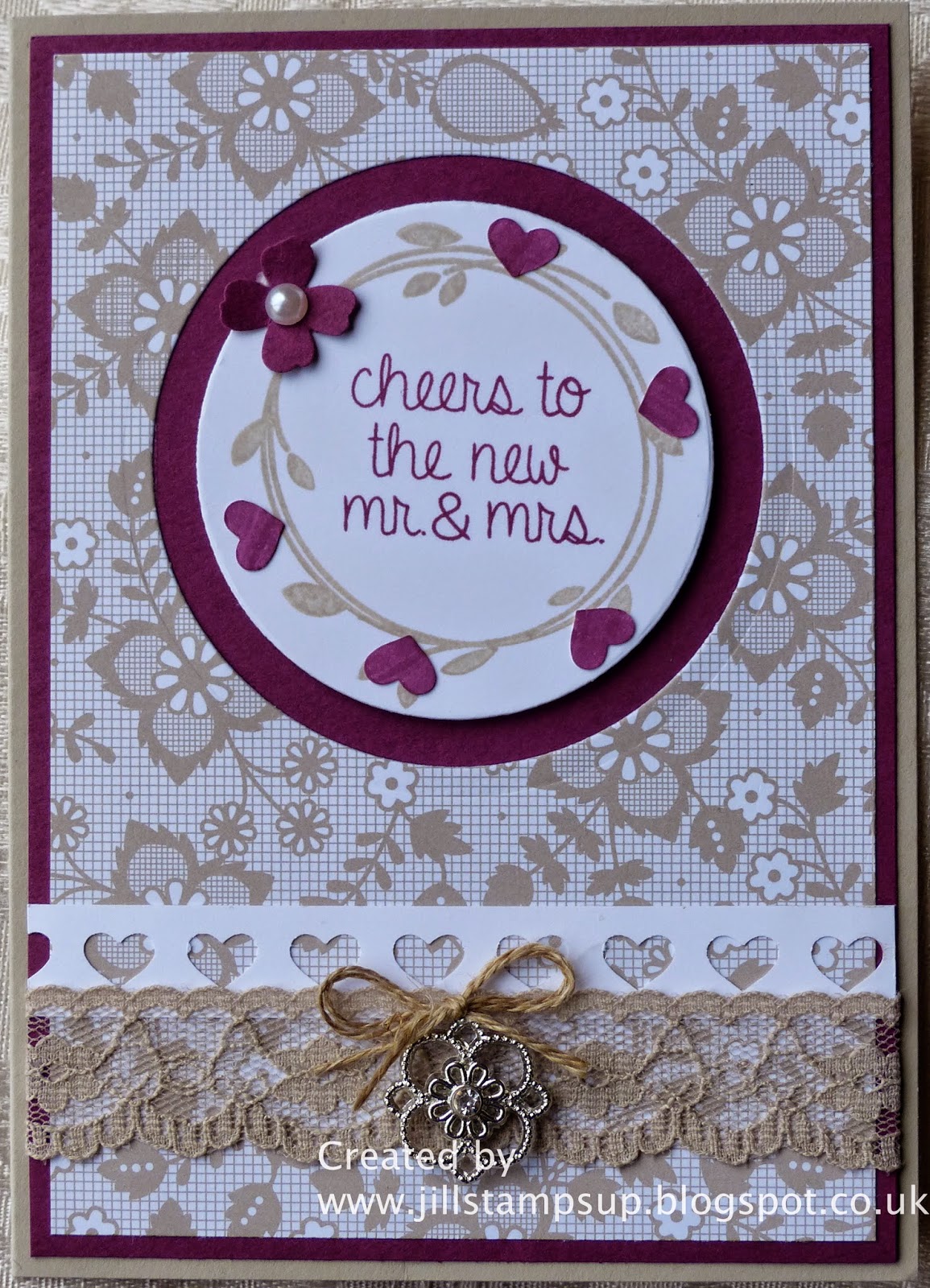 I've added a Rich Razzleberry layer and used a stamp and sentiment from the Your Perfect Day set which I've inset where I cut a circle out with my framelits.
I coloured some of the spare hearts with a Rich Razzleberry marker and added a punched Itty Bitty flower.

I've finished with some Lace Trim and linen thread.

The retiring list has gone live today - and killed the Stampin' Up ordering website in the process but hopefully back up and running again now!

Click here to take you to the list - items are only available while stocks last and some have gone already I'm afraid.

Quite sad in some ways but exciting in others as this means there are lots of new goodies coming.

Don't forget the current catalogue ends on 2nd June when a lovely new shiny one will be available!

No changes in the main colour families this year except for Basic Black and Basic Gray being improved for a better standard archival ink.

The 2013-2015 colours were already flying off the shelves before the list went live so I hope you got what you wanted.

If you 'need' anything that is retiring let me know asap!

I have finally made the gorgeous bouquet on the front of the seasonal catalogue.

You can choose to buy a co-ordinating stamp set to stamp the petals which I did but the kit alone is £22.95 which is pretty good value because there are many hours work in it to bring it to this point!!

I made it for a present and it is stood in a lovely Dartington crystal vase too weighted down with marble stones.

Definitely something different for a present if you are in the market for a gift!

Less than a week until the retired list now so watch this space!! 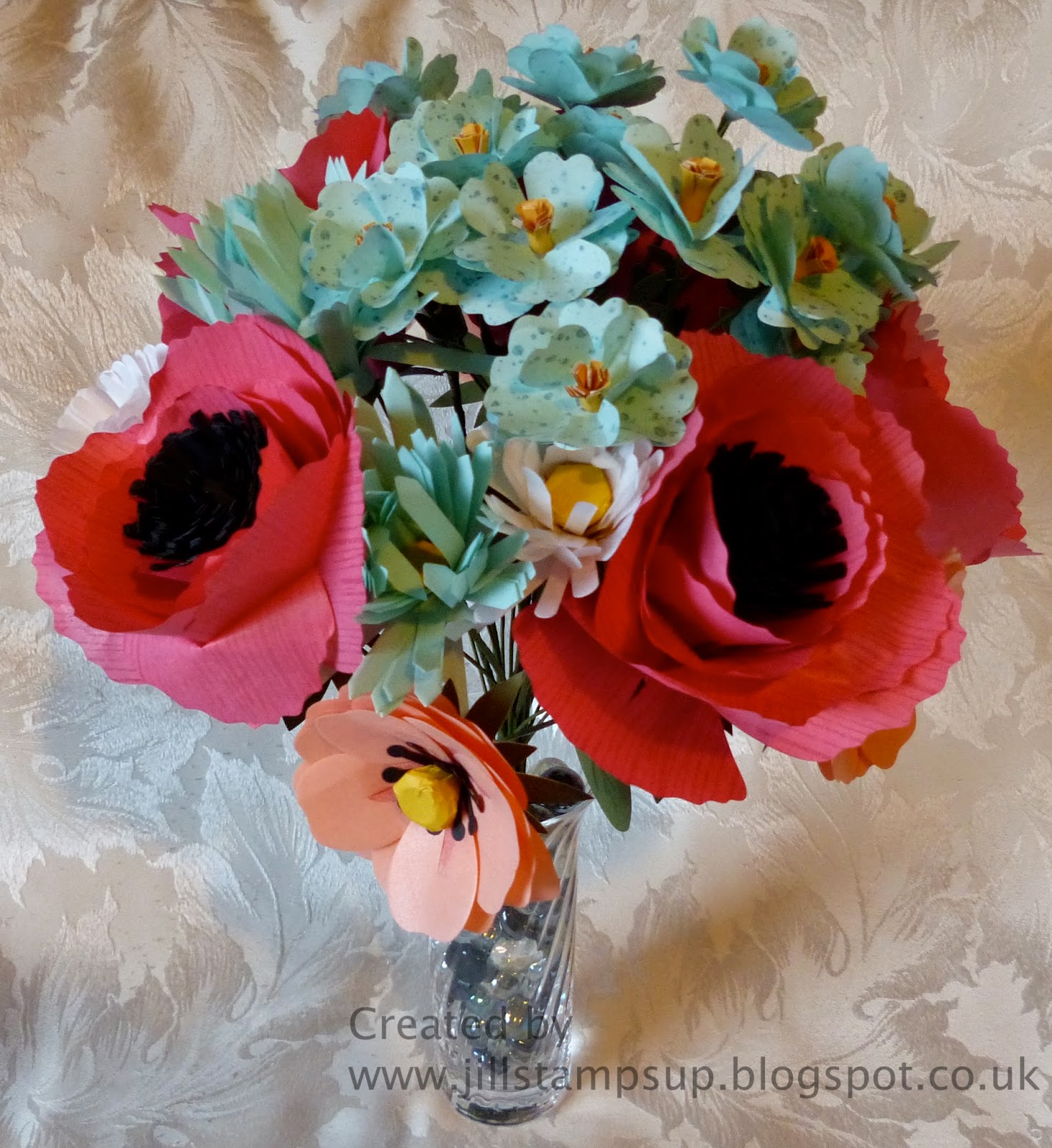 Email ThisBlogThis!Share to TwitterShare to FacebookShare to Pinterest
Labels: build a bouquet, kit

The Clearance Rack will be updated on 8th April - click here to see what fab offers appear and let me know asap if you want me to add any to an order.

AND there are some super offers on Weekly Deals - framelits, punches, accessories and the magnetic platform - do have a look.
Posted by Jill at 23:07 No comments:

Things have also got so crazy I've made my first scrapbook page!!

Similar to the cards on my previous post we all made a scrapbook page too for everyone else to also go home with.

This is the first time I had ventured in to scrapbooking and because I like things being a little fiddly I chose the Project Life pockets. 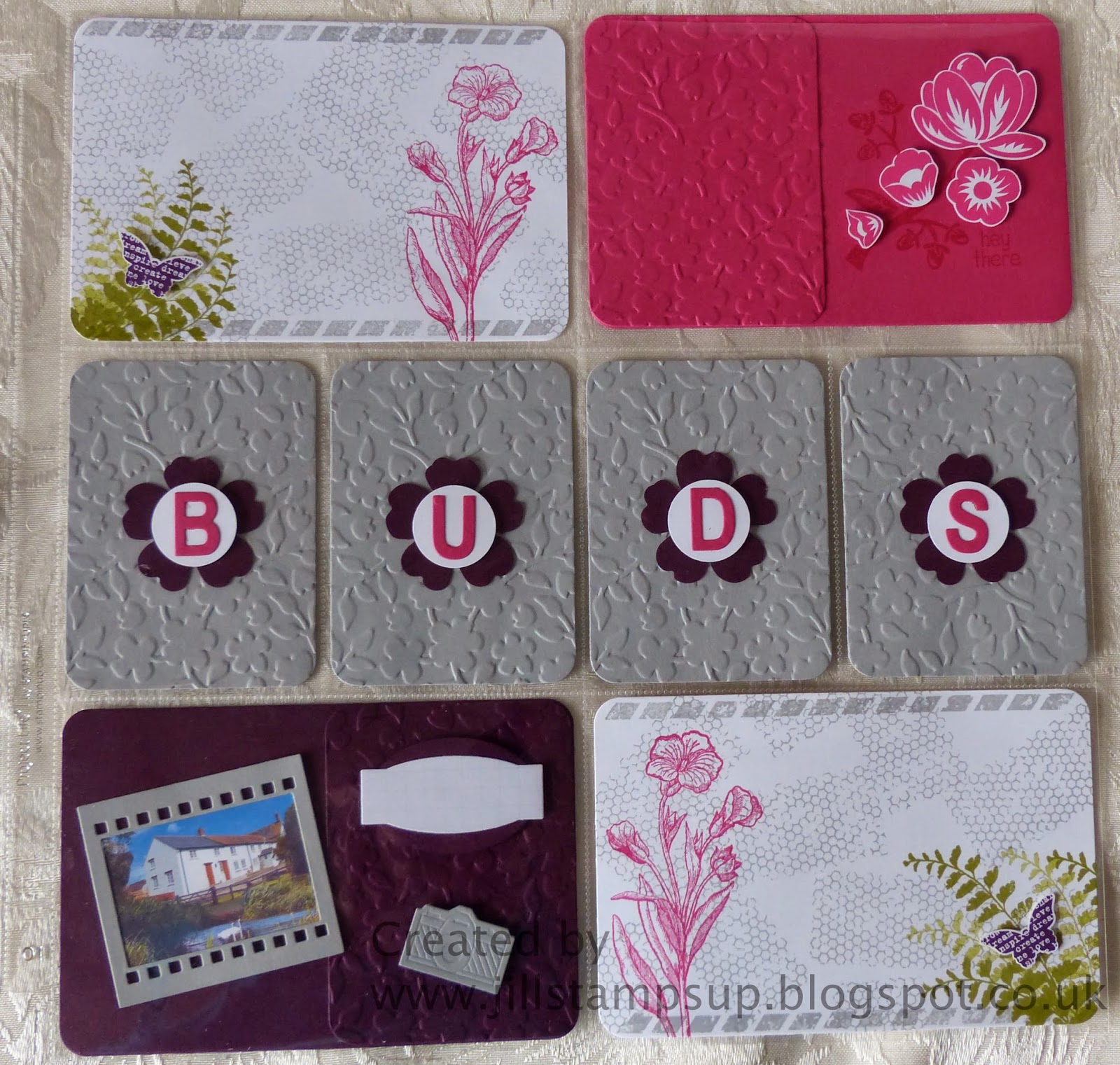 I chose to design my page so it could be used as a memento of our weekend away.
It went down really well.

The cards are all cut out using the Project Life cards & labels framelit set.
The white cards are stamped up using the Butterfly Basics set in Smoky Slate, Old Olive, Melon Mambo and a little Blackberry Bliss butterfly.

In the top right I've used the very aptly titled 'Hey There Buds' and stamped it on Melon Mambo and again on white to fussy cut some of the flowers to highlight them.

I've used the Spring Flowers embossing folder too and 'Buds' was cut out using the Little Letters thinlits.  These letters were mounted on a punched circle and then on to a Blackberry Bliss pansy punch.

The bottom left panel has used a couple of the framelits from the On Film set.  I printed everyone a little picture of where we stayed too as the frame looked sad with nothing to go in it.

So, I have a few pages to finish off but I will also have 12 other pages to show you when I have - a great start to my collection.
Posted by Jill at 23:03 1 comment:

As previously mentioned we all chose a stamp set for our trip away and had to make 3 cards using it as exclusively as we could, with adding a sentiment from elsewhere if necessary.

I chose World of Dreams.  I made 3 cards and took a 'Blue Peter' box so everyone else could also make all 3. 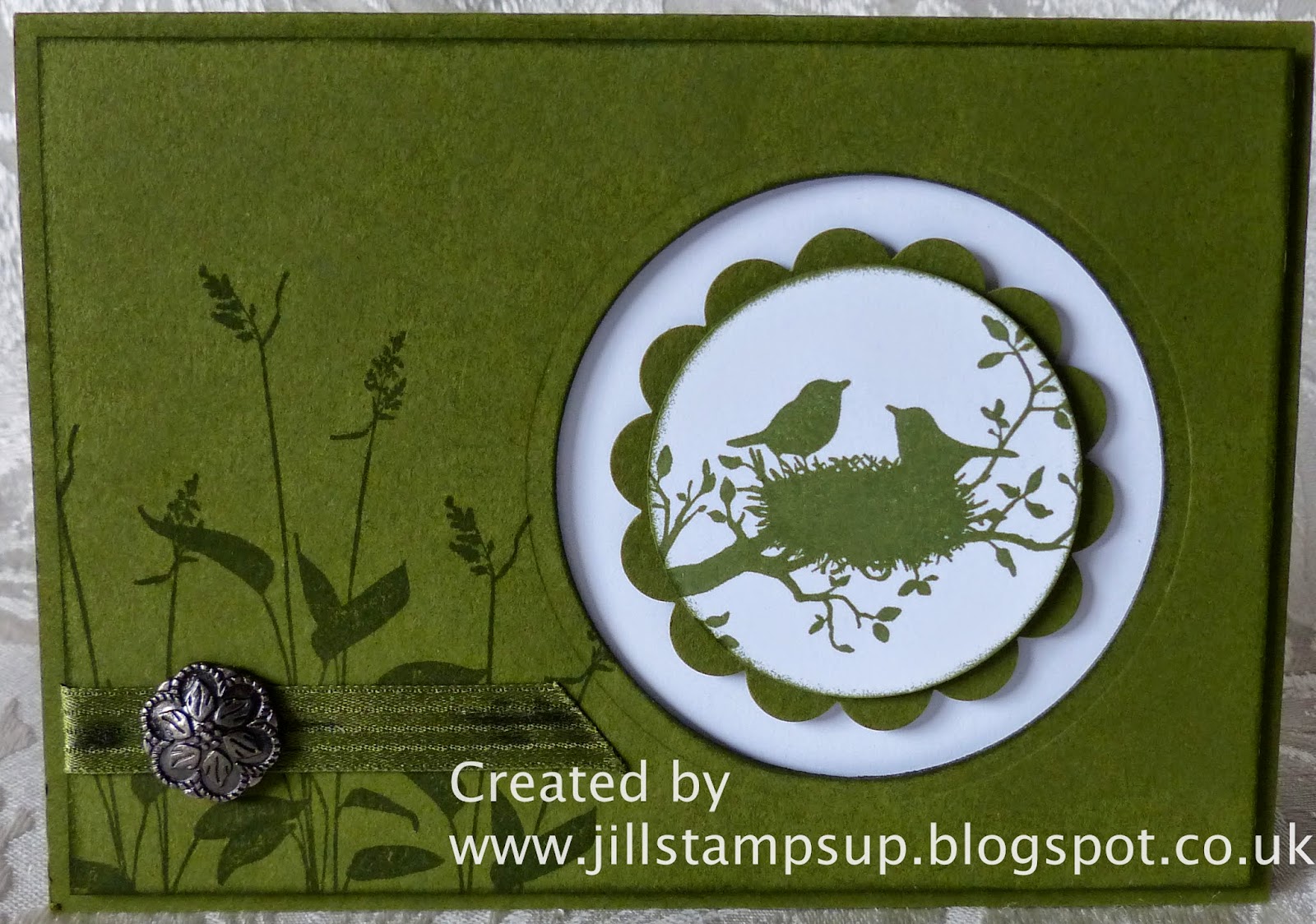 I cut an extra panel of Mossy Meadow and cut a circle with a framelit to mount the image in, layered on a scalloped circle punch.

This card has some stitched satin ribbon to match and an Antique Brad to finish. 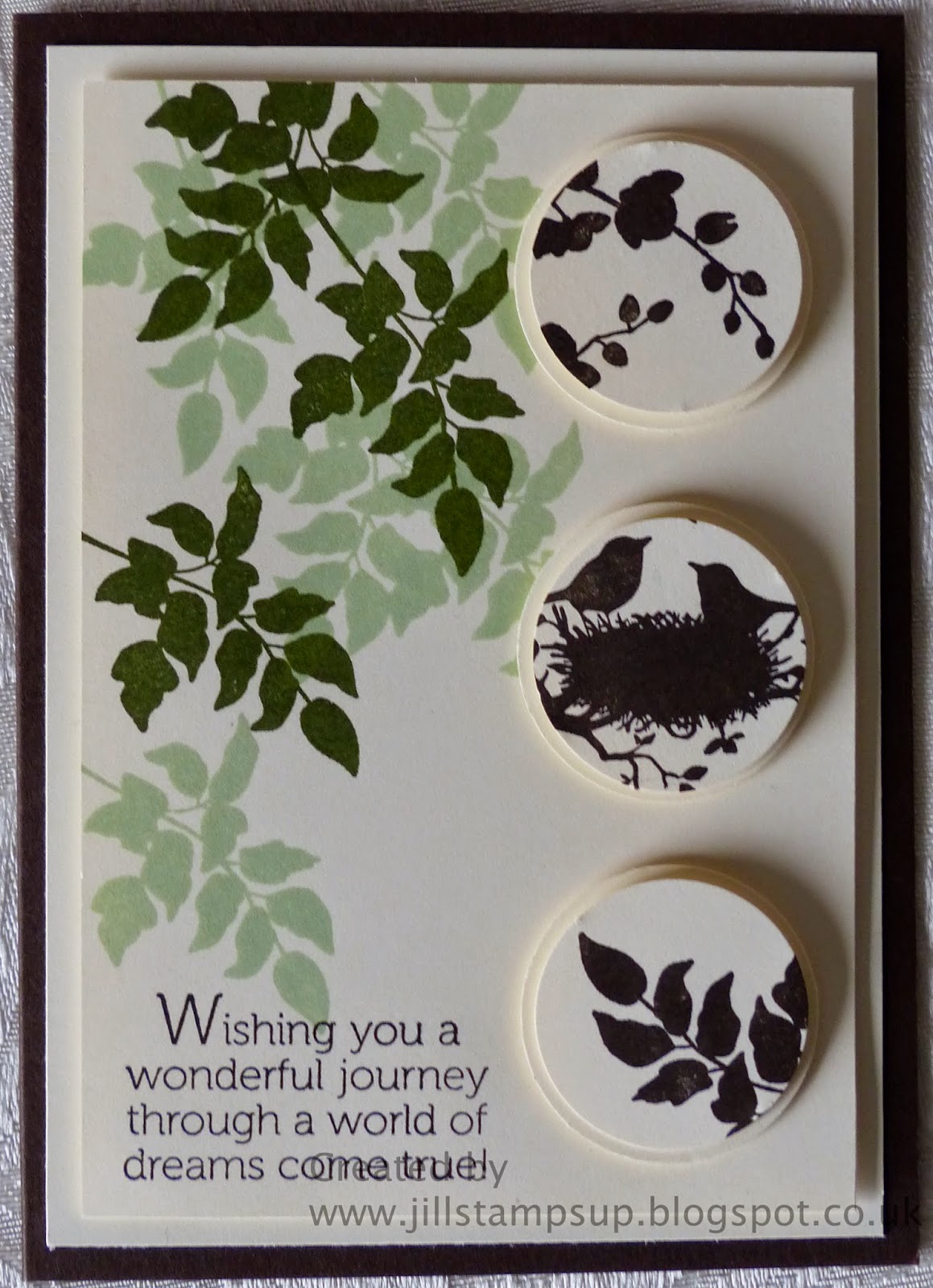 This card also uses a touch of Mossy Meadow but brings in Early Espresso and Pistachio Pudding.

The sentiment is also in the set.  There are 4 images and 2 sets of words in the set (the 4th image is the grass in the first card).

I've used 3 of the images and punched them out with a circle punch, layering them on a slightly bigger circle for effect.

My last card uses the Label Card thinlit for the base and uses all the colours previously used but the card base is Pistachio Pudding this time.

The white label was stamped and cut out using a frame lit also in the set and the festive pricking template used just to highlight it.

I used a Petite Pair sentiment for inside the card and the scalloped oval punch for layering. 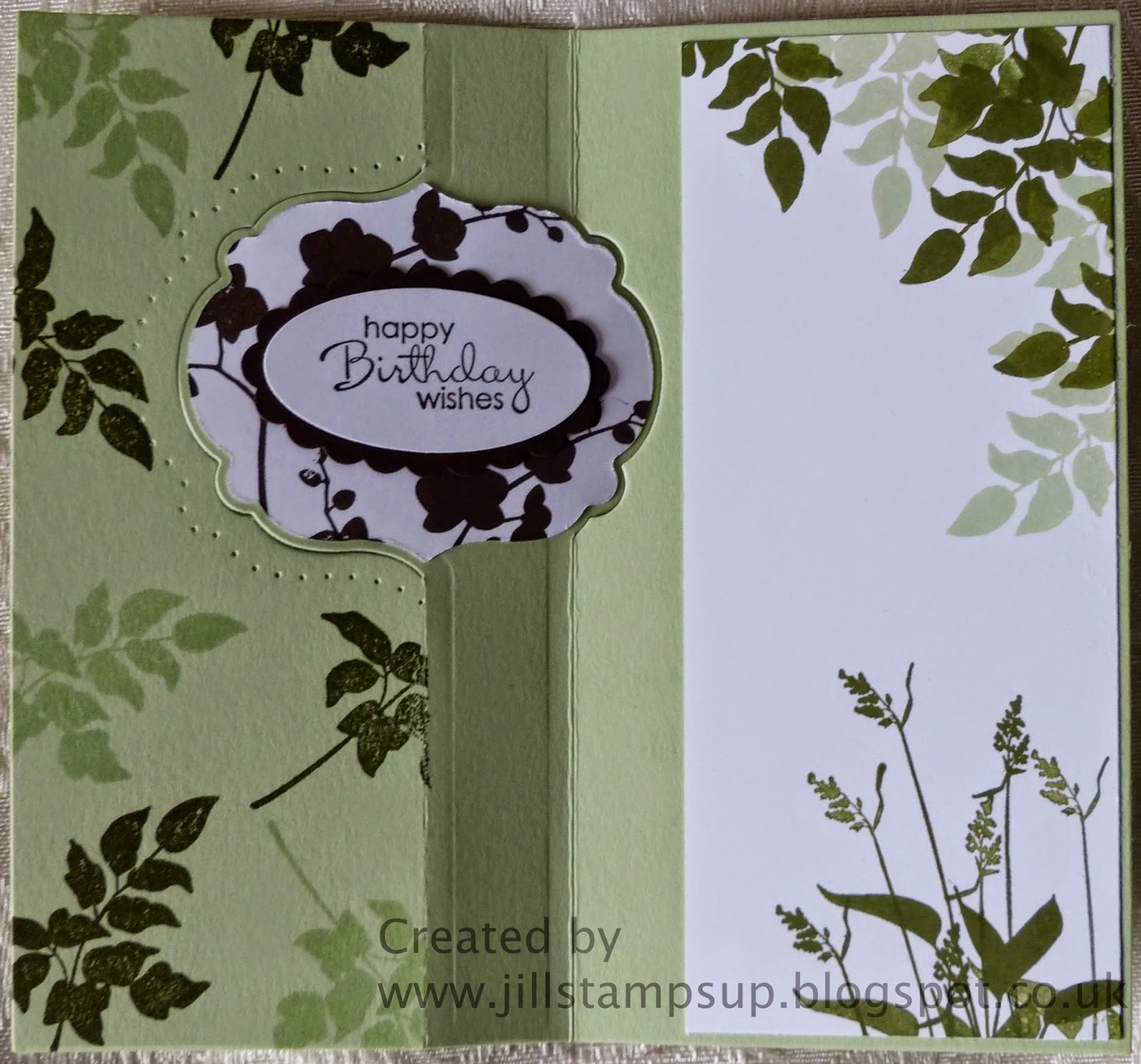 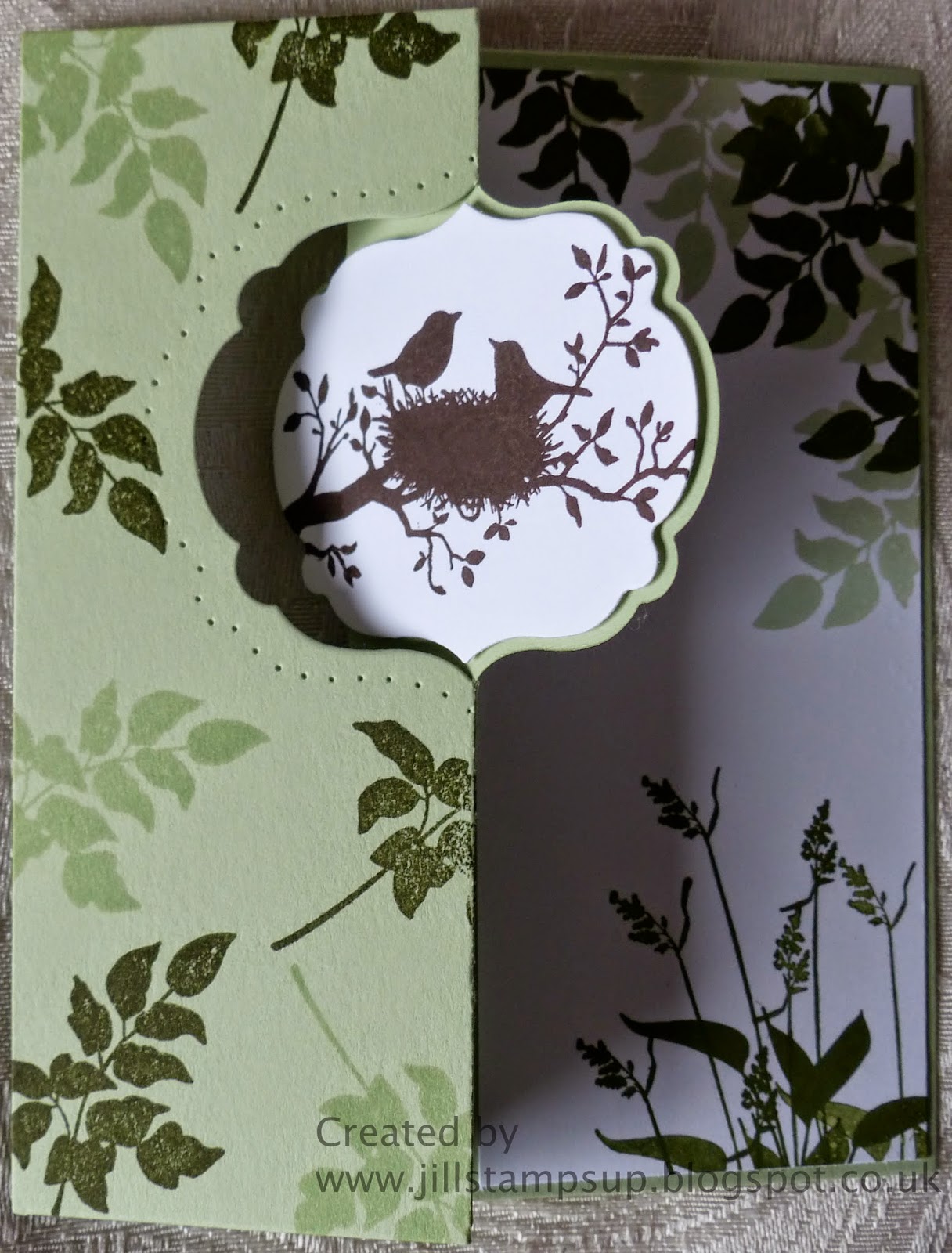 Well Sale-a-bration has gone, it won't be long before we are talking about the new catalogue!!

If you're up for a deal the Gift Box punch board and 3 different sets of framelits are among the deals this week - do have a peek!

For our recent weekend away each of the Buds took a show and tell - for mine I made a selection of curvy keepsake boxes.  The die is a pricey item but now I have it I love it and you can do so much with it.  I do hope it stays in the next catalogue.

There are many more things I could of done with it but I tried to use some different papers, embossing folders, punches etc to just provide some ideas.

I put them on a little cardboard cake stand to show them off so have taken some pics whilst turning this round to give you a better idea.  If you want a box shown in close up let me know. 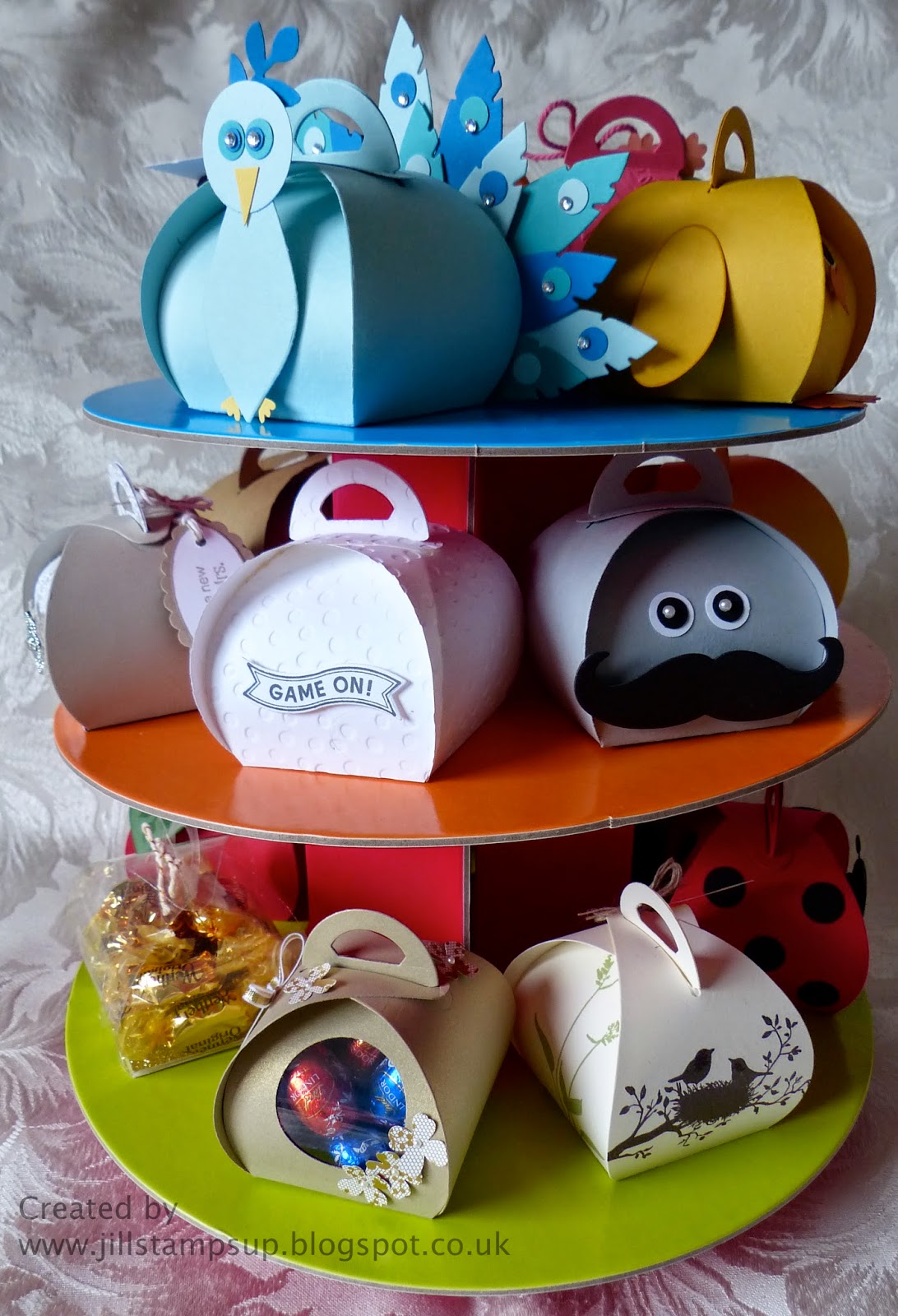 The peacock I found on Pinterest has been a big favourite.

The feather framelits work brilliantly on it. 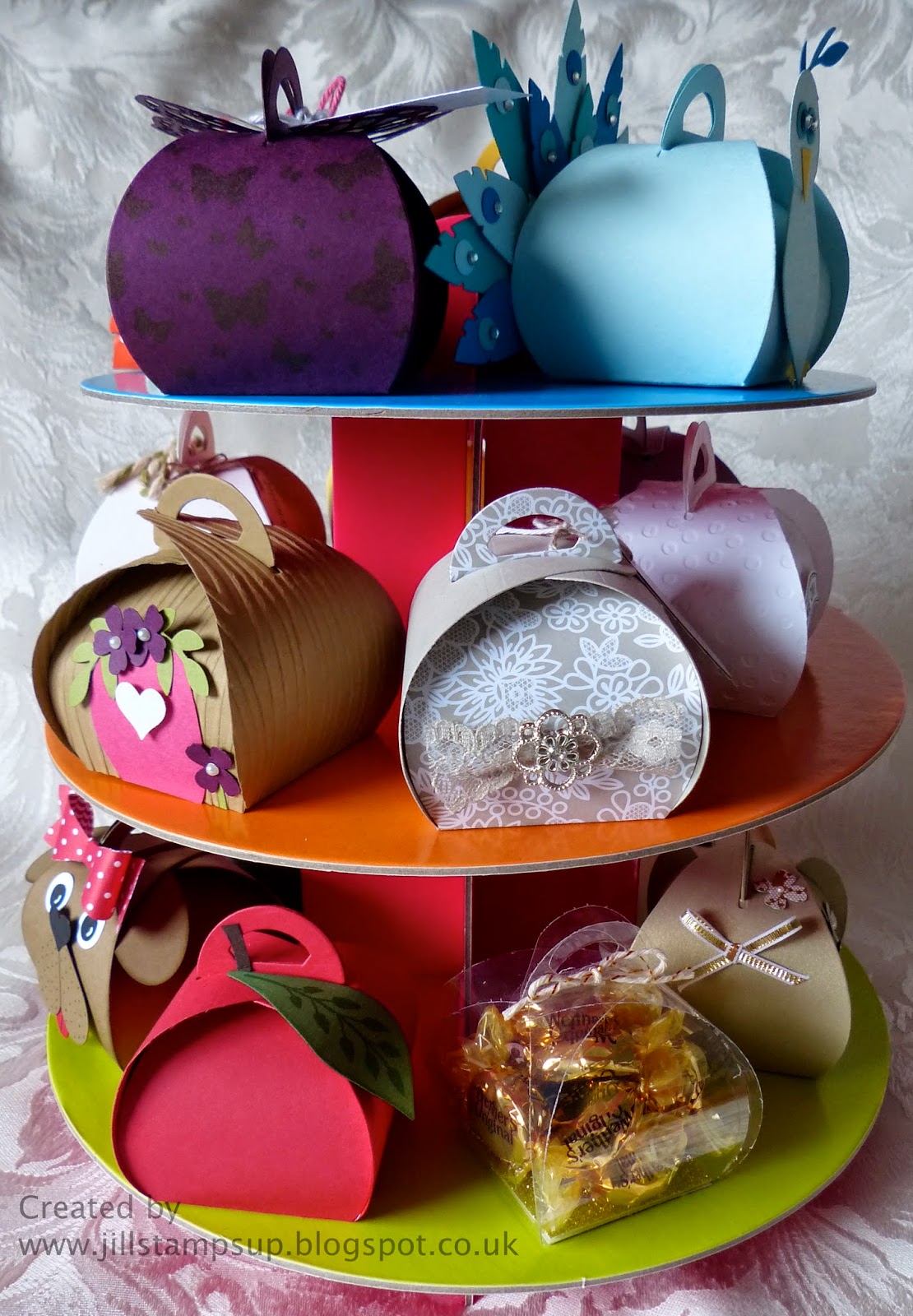 I tried one in acetate which is rather fun.

The purple box has a butterfly on top which will benefit from a feature another day too I think. 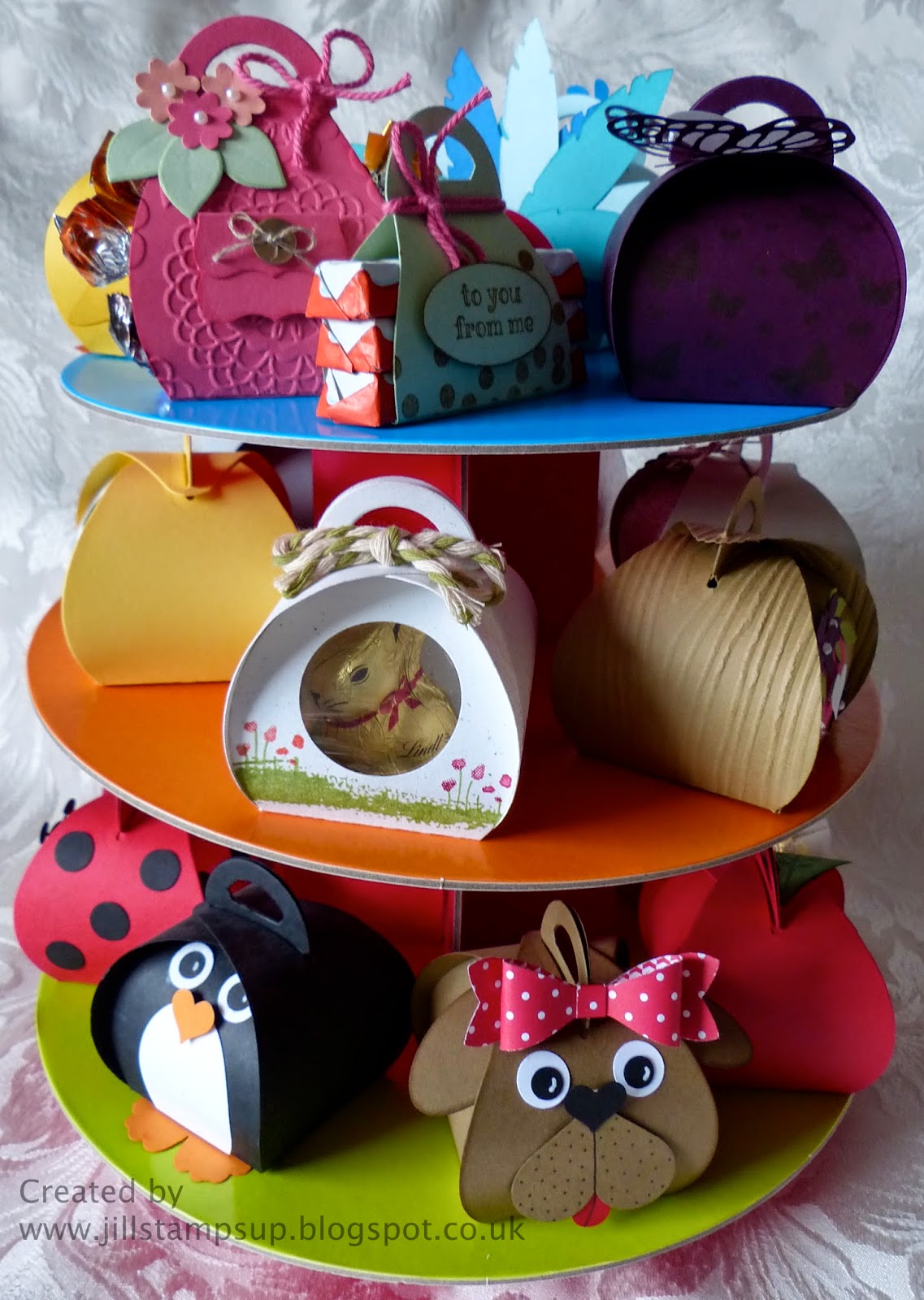 The dog is also proving popular and I rather like the little bunny peering out of the middle one here.

Two of the items on the top shelf in this picture are made using partial bits of the die to give more of a purse effect. 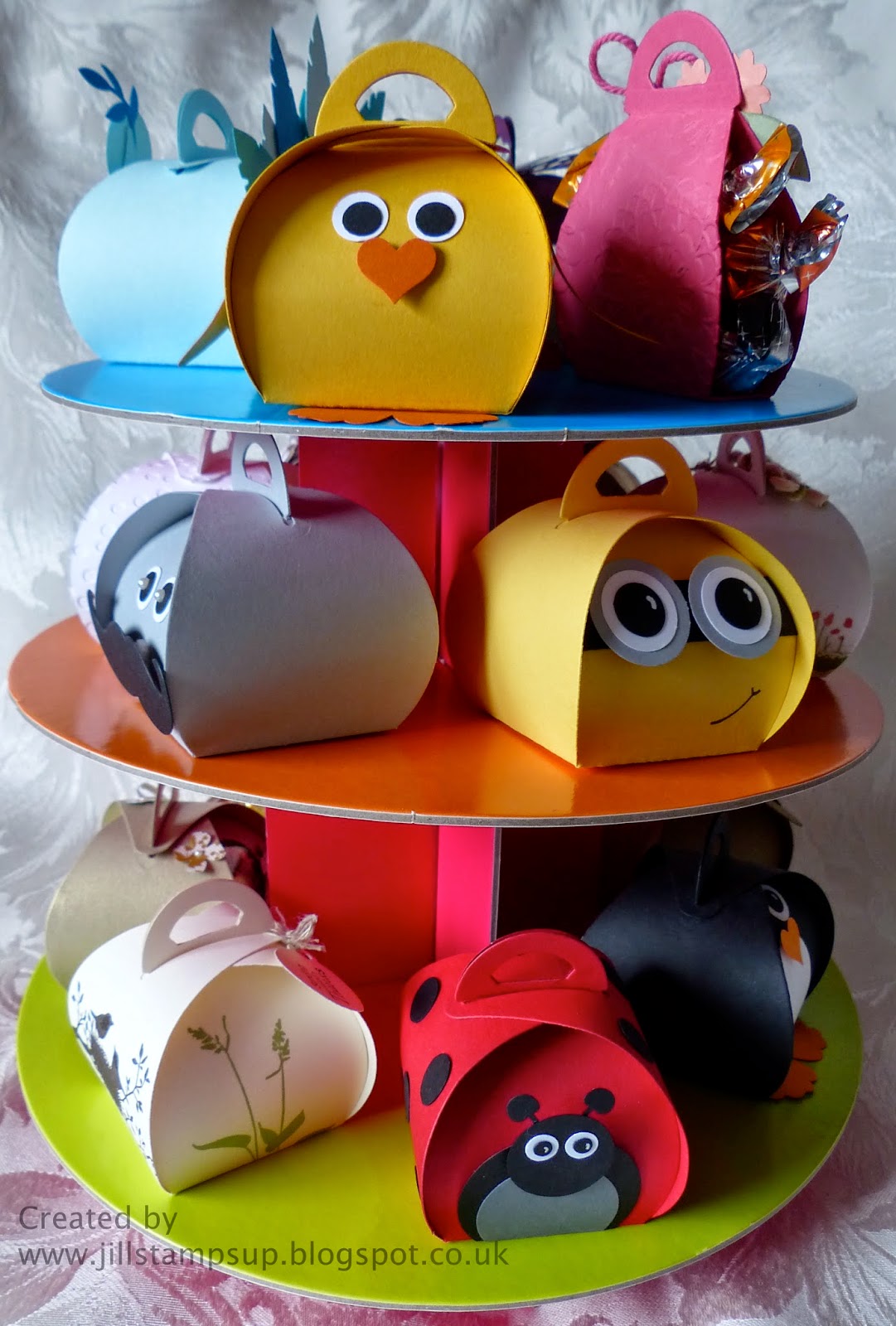 I made a few minion boxes at Christmas and they went down well.

The chick will feature again in a post too - sooo cute! 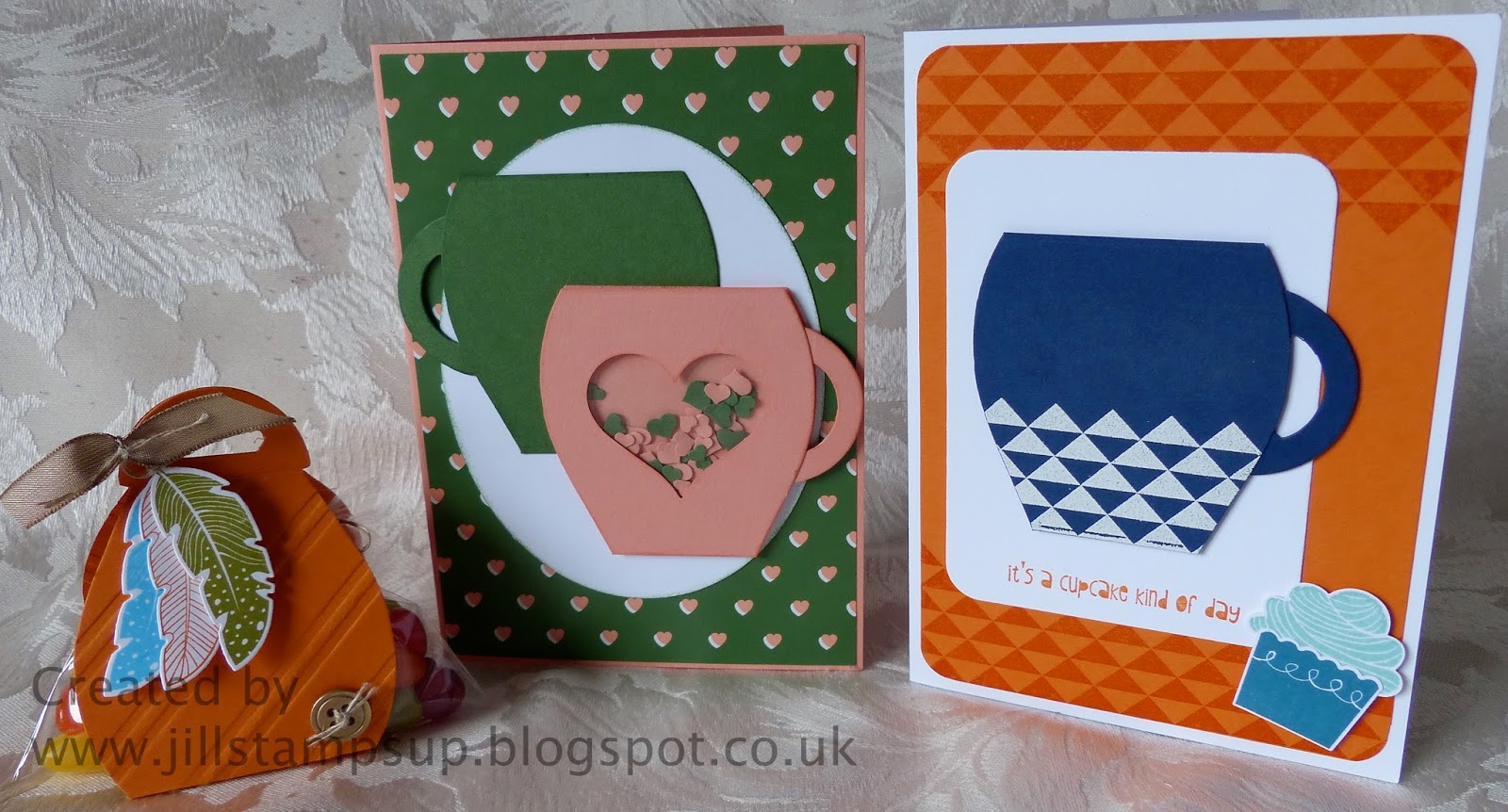 Finally another purse type container and 2 cards using part of the die to form a cup - a great idea.

Let me know if you want to know more about anything in particular used on a box.

Jill
My name is Jill and I have been crafting one way or another for as long as I can remember. In 1990 I discovered Quilling and through this have since discovered many other paper crafts (Jills Quills). I am now an Independent Stampin' Up Demonstrator too to spread the stamping message (Jill Stamps Up). I enjoy all sorts of card making and if I ever have a moment also dabble in parchment craft, cross stitch and jewellery making!